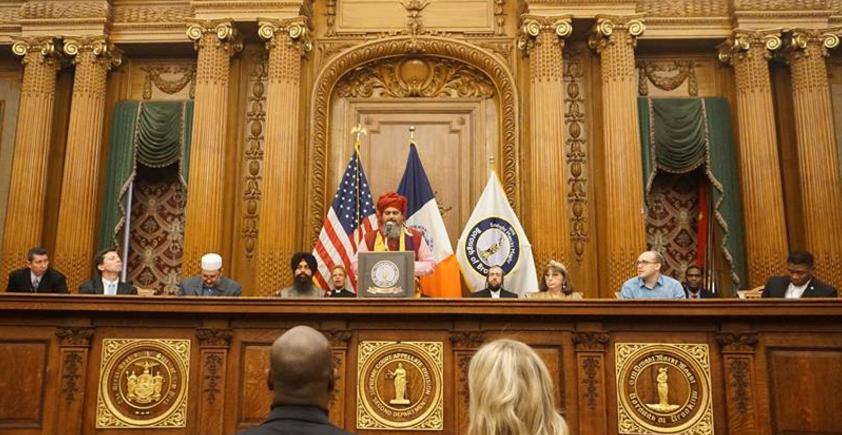 Guruji's mother Devaki Kanakamma was his first guru and spiritual teacher, and she trained him in yoga from early childhood with the help of his father Dr. Thomas Thankappan. His mother was from a Hindu family (Kavil family) and father was from a Christian family (Nadayil Family). From his school years, Guruji was active in Yoga, sports, games, martial arts, dance, music, singing, acting, drawing, painting, climbing, trekking, alternative medicines, gardening, organic farming, interfaith spiritual discussion groups, and other selfless community services.

Guruji's parents send him to different masters in order to learn different advanced yogic techniques and other art forms. As a sport and art lover, he has represented his schools, colleges, and university nationally. He received numerous certificates, medals, and awards including the first prize for the cultural program from the national level Annual Leadership Course and Rock Climbing camp which was organized by National Cadet Corps (NCC- an organization within Indian Military). Guruji was a member of NCC for 7 years and held different positions as Cadet, Corporal, Sergeant, Sergeant Major, and Senior Under Officer and received A, B & C certificates.

Guruji was a spiritual traveler from his young age, In his yogic life journeys, he met and learned from self-realized Himalayan masters, saints, honored yogis, Sidhas from South India, artists and alternative medical doctors. Having experienced a yogic lifestyle for over 50 years, Guruji lived in Himalayan caves, ashrams, and palaces as well as living under Gurukula (guru-sishya-sampradaya), and modern educational systems. He is a scholar in modern and ancient techniques of yoga, meditation, and other yogic healing techniques. Guruji received numerous spiritual & religious honorary titles from different spiritual masters & organizations. In 1989 on the day of Guru Purnima, he ordained as a "Guru" (Spiritual Master) by Avadhuta His Holiness Sadguru Paul Muni Bharath and send Guruji to different masters and spiritual centers in order to promote Universal Spirituality.

On June 23rd, 2007, at the "World Peace Festival / World Yoga Festival" which was held at the Consulate General of India, New York, Yogiraj Jagatguru His Holiness Swami Bua Ji Maharaj announced that "Guru Dileepji is a great spiritual master for the World" and that his yoga, interfaith & culture of peace activities are helping the global community. On July 29, 2007 (Guru Purnima Day), His Holiness Swami Bua ordinated Guruji as his successor with the title "Jagatguru" (Universal Master) from his traditional and spiritual lineage. Guruji is the only person took "Sanyasa Diksha" (monkhood) from Yogiraj Jagatguru His Holiness Swami Bua Ji Maharaj.

Guruji is involved with numerous NGOs around the world and a mentor for many people. He was the International Ambassador for International Yoga Federation and World Yoga Council from 2004 to 2010. He is the US representative to the Universal Parliament of Religions, in Argentina, Honorary Advisor of the "World Yoga Foundation”, Advisor of Global yoga Alliance in India, and a Trustee of the "All Faiths Seminary International". Guruji is an active yogi in social media and serving people globally. He was an NGO representative to the ECOSOC, United Nations in 2015 and 2016. Currently, he is the Secretary of the Committee of Religious NGOs, Vice President of the UNSRC - Salus Wellness Network at the United Nations HQ and NGO Representative to the United Nations Department of Global Communications in New York. He often performs mantras & prayers at the Borough halls & constantly interacting with international politicians, artists, Rabbis, Swamis, Gurus, Bishops, Imams, Monks, diplomats including high officials from the United Nations.

Guruji is an honorable guest speaker at numerous international conferences, events, festivals and he was judges in many international yoga asana competitions. He is a recipient of several peace awards and titles for his yogic services to humanity. He is considered to be a new age celebrity yogi and humanitarian having multifaceted talents and a wide range of friends from homeless people he serves to diplomats. He often gives discourses and is interviewed by media around the world. Currently, Guruji is conducting social, cultural, and yogic lifestyle-related classes, events, workshops, meetings, and festivals in New York City. His mission is to cultivate global peace and harmony through yogic life teachings.

His vision is to fulfill the ancient Vedic wisdom of great masters from India and create a global family “Vasudaivakudumbakam”. He follows the teachings of Mahatma Gandhi “Simple Living and High Thinking”, the teachings of Swami Sivananda Saraswati “Love All, Serve All”, and the teachings of Mother Teresa "A Smile Can Change The World". 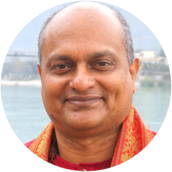 Spiritual Journey of a Yogi

Guruji's mother, the late D. Kanakamma, was an upper primary school teacher at the Government Palace Girls High School in Tripunithuira, Kerala, India. She is from the Shrambikkal House which belongs to a Hindu family (Kavil) from Chennithala. His father, the late Dr. T. Thankappan, was a supervisor at the telephone department of the Government of India. He is from the Perakathu House which belongs to an Orthodox Christian family (Nadayil) from Chennithala. His elder brother, T. Prakash, is a retired employee from the EME Branch of the Indian Army. Currently, his Sister, Advocate Latha. T. Thankappan is a pleader at the High Court of Kerala and the Secretary of the National Lawyers Union.

As an interfaith/inter-religious married couple, Thankappan and Kanakamma did not receive support from their families. She was totally neglected by her relatives as well as her husband's family due to her religion and skin color. Somehow they handled their life through their hard work and support from the general public. They received a very small salary from their jobs and with that, they were able to send their children to regular schools and colleges. Additionally, they encouraged their children to participate in sports, games, arts, music, dance, community services, and other extracurricular activities. Thankappan would save most of the money he earned and Kanakamma would spend all her earnings to support their family needs. Kanakamma was very helpful to many children in her school and other members from their home town of Tripunithura. She was supporting poor children with their educational fees, as well as food, clothing, and other expenses, which meant that she would not have been able to save any money for her own children's future.

Thankappan's family demanded him to separate from his wife (Kanakamma) and he did for eight years. From the initial shock, Kanakamma ended up with a heart problem and doctors had given her a prognosis of a few months to live. As a doctor of homeopathy and alternative medicines, Thankappan was not ready to give up on her. They both returned to the practice of yoga in their home, in addition to following proper health food guidelines. Kanakama was treated with homeopathic and natural remedies by her husband. On December 25th, 1968, Thankappan gave a birthday gift to Kanakamma. That gift was "Guruji," who was unexpected. Thankappan was not planning to have another child and asked Kanakamma to abort the child. But Kanakamma was not someone who would give up her child. Because of the incongruent viewpoints, an argument occurred between Thankappan and Kanakamma.

Kanakamma went to visit a few saints (Sidha Yogi Prabhakarji, Guru Nitya Chaitanya Yeti, and Sathya Sai Baba) and had a discussion with them about her pregnancy. Those saints strongly suggested to her, "Do not kill the baby, he will be a yogi and he has some mission to do on this earth." She shared this news with her very close friends and they all supported her to have a new baby. According to Vedic astrology, Guruji was born in 1969, on the early morning of Chithira Star during the month of Chingam in Tripunithura, Kerala, India. Little Guruji, who received the path of yoga from his mother's womb, had a great time with numerous saints, yogis, spiritual masters, and well-known musicians and dancers from an early age. He became a member at the St. Mary's Syrian Jacobite Church (Nadamel Church) in Tripunithura.

When Guruji was around three and a half years old, their rented house caught fire and Guruji was left behind in the house. Somehow his sister remembered her little brother and immediately ran into the house, took Guruji's feet, and dragged him out of the fire. Guruji was looking at the fire and wondered how it started. It was later discovered that the fire was created by the home owner's son in an attempt to get rid of their tenants. Guruji was the youngest child in the neighborhood and he got so much love from the community members. After 6 months, they bought a new house in Mekkara, Thekkumbhakam, Tripunithura, and started a new life there.

Guruji went to a Catholic school (St. Mary's Lower Primary School) from the age of one and a half until the end of the 4th grade. He was very active in sports, games, dance, and other extracurricular activities as well as competitions. It was at this point, in 1979, where he began to teach yoga asanas to his fellow classmates and the sports team. He then went on to study at the Government Sree Rama Varma Upper Primary School in Cochin City for one and a half years, where he was an active member at the "Science Club" and "The Bharat Scouts and Guides," and afterward attended Government Boy's High School in Tripunithura. In this school, he became popular as a sportsman, quiz competitor, work experience activist, and the secretary of the Science Club. From the 7th grade onwards, he began representing his school in District and State level competitions for games and sports. He received certificates for 100, 200, 400, 800, 5000, and 10000 meters races, high jump, long jump, hurdles, javelin throw, cricket, soccer, volleyball, chess, Kho Kho, Kabadi, shuttle badminton and much more!

When he was in the 8th grade, he joined the National Cadet Corps (N.C.C) - Junior Division, Army Wing, and earned positions (ranks) as a corporal and sergeant. He attended a few Annual Training Camps with N.C.C, along with voluntary activities, republic day and independence day parades in his city. In 1984, he was selected for the Southern State level Rock Climbing Training Camp in Neyyardam, Trivandrum. There he visited the Sivananda Ashram and had a great time with Swami Vishnudevananda and his mother. Additionally, he was selected as a volunteer captain for the State level competitions for children with special needs. He received certificate "A" (part I and II certificates) from the N.C.C. in 1985.